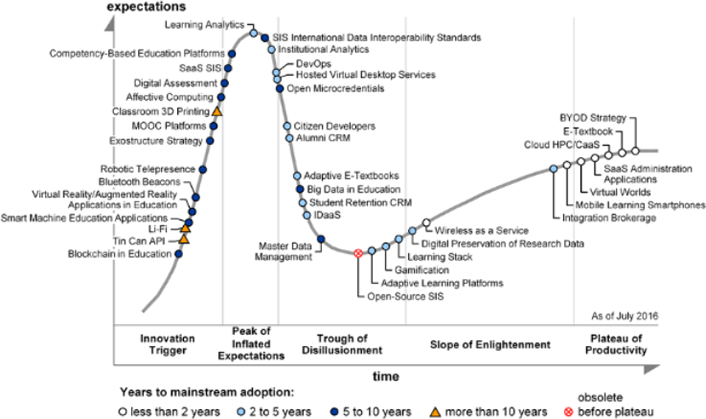 Every year Gartner publishes its Hype Cycle of Education. For 2016, we have invited members of CHEIA to post their reflections on this hype cycle for Christian Higher Education.  Here they are:

What should CHE Learn from the Gartner Hype Cycle? In diffusion of innovation theory, innovators are the first 2.5% of people to adopt a new technology. That is part of our role-to determine whether a new technology might eventually be promising.

Unfortunately many of us innovators have a bit of ADD and are always focused on the next new shiny thing.  So we play with things on the first half of the graph, and then then dump them forever like a bad date once they hit the trough of disillusionment.  The result is that our organizations and the innovations we test, rarely “cross the chasm” into mainstream use .  I think our success as innovators should me measured not by how many shiny things we identify, but by how many innovations we help bring into mainstream adoption in our organizations in a way that is transformative.  Ultimately as Christians we are under the collective mission statement of “love God, love others,” so as we evaluate technologies to consider whether to take them into mainstream, we should always ask how this technology will help us love God or love others better.

I, too, am surprised about what MOOCs are placed, but I think that you are right about them using the word to talk about the platforms as adopted for institutional use, not MOOCs themselves. Overall this has a focus on innovations in technology, not pedagogy or process, it seems. Those could be analyzed as well on probably a similar curve.
I totally agree with Matthew on the idea of a “Biblical understanding of the cloud” – outsourcing of our data and services becomes necessary but requires putting trust in organizations that are nearly always going to be secular, and have the potential to be controlled by state interests. (NSA warrants for metadata, etc.) I know that when I was at ICCM a few years ago people were hesitant to give over their IT to anything other than locally hosted systems because of the sensitivity of their data. In missions, that’s more of a concern than CHE, but it may someday be more of a concern in CHE as well.
I also agree with Matthew on the necessity of interdisciplinary learning. For over a century, disciplines have become more and more fragmented, and jobs that used to not require a college degree or master’s have become increasingly guilded and professionalized. This must change if we are to keep up the pace of innovation, productivity, and access for all.